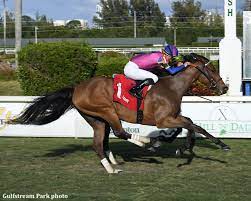 Saturday, Gulfstream Park
ORCHID S.-GIII, $100,000, Gulfstream, 3-27, 4yo/up, f/m,
1 3/8mT, 2:12.34, fm.
1–WAR LIKE GODDESS, 117, f, 4, by English Channel
1st Dam: Misty North, by North Light (Ire)
2nd Dam: Misty Gallop, by Victory Gallop
3rd Dam: Romanette, by Alleged
1ST BLACK TYPE WIN, 1ST GRADED STAKES WIN. ($1,200 Wlg
’17 KEENOV; $1,000 RNA Ylg ’18 KEESEP; $30,000 2yo ’19
OBSOPN). O-George Krikorian; B-Calumet Farm (KY); T-William
I Mott; J-Julien R Leparoux. $59,520. Lifetime Record:
4-3-0-0, $156,184. Werk Nick Rating: F. Click for the
eNicks report & 5-cross pedigree.
2–Always Shopping, 123, m, 5, Awesome Again–
Stopshoppingmaria, by More Than Ready. O/B-Repole Stable
Inc (KY); T-Todd A. Pletcher. $19,200.
3–Sorrel (Ire), 120, f, 4, Dansili (GB)–Anice Stellato (Ire), by
Dalakhani (Ire). O-Augustin Stable & James Wigan; B-Mr J
Wigan & Mr G Strawbridge (IRE); T-Christophe Clement.
$9,600.
Margins: NO, 3, HF. Odds: 5.60, 1.10, 3.90.
Also Ran: Delta’s Kingdom, Sister Hanan, Morning Molly,
Crystalle, Belle Laura, Dizzy. Scratched: Enjoyitwhilewecan. Click
for the Equibase.com chart, the TJCIS.com PPs or the free
Equineline.com catalogue-style pedigree. VIDEO, sponsored by
Fasig-Tipton.
Easily the least experienced of the nine turf distaffers signed
on for Saturday’s GIII Orchid S., War Like Goddess continued to
make rapid progress in just her fourth career trip to the races,
running down favored Always Shopping in the shadow of the
wire to win for the third time.
Belle Laura (Mucho Macho Man) showed the most early
initiative and took the Orchid field through the first couple of
furlongs, but was displaced by Sister Hanan (Orb) passing
through the stretch for the first time. Always Shopping secured a
good spot from fourth, one back and one out, while Julien
Leparoux settled War Like Goddess one from the rear behind a
modest pace. There was very little change in the running order
during the middle stages of the 11-furlong test, but Always
Shopping was the first to make a serious move, tipping out into
the three path at the five-sixteenths, with the long-time leaders
in the crosshairs. The chalk was roused to the front outside of
Sister Hanan approaching the final eighth of a mile and looked
on her way to victory, but War Like Goddess was asked for her
best by Leparoux at the quarter-pole and conjured up a flying
finish to score narrowly. Sorrel, making her first U.S.
appearance, made steady progress from the second half of the
field to be a decent third.
War Like Goddess came from eighth in a field of nine to
graduate at first asking in a nine-furlong maiden over the
Churchill turf Sept. 26 and went last-to-first to add an Oct. 28
allowance in Louisville going this distance before hitting the
shelf. The bay, who was RNAd for the upset price at Keeneland
September in 2018, resurfaced in an ambitious spot and gave a
decent account of herself, finishing a midpack fifth in the
GIII The Very One S. Feb. 27.
ATiming was important there. She just got up in the last jump. I
just told [jockey] Julien [Leparoux] to let her get her feet under
her and make a run. I kept it simple,@ winning trainer Bill Mott
said.