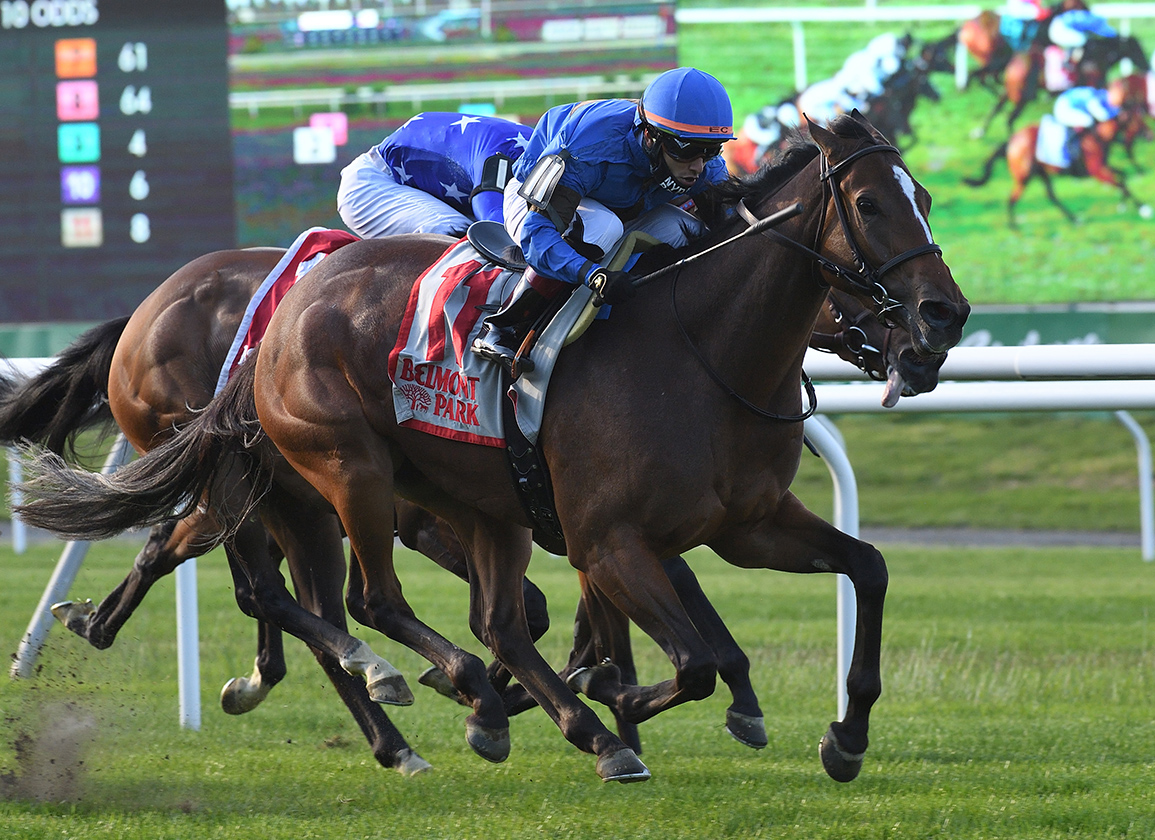 Bye Bye (Into Mischief) did it tough from her widest gate in a field of 11 for Saturday’s GIII Soaring Softly S. at Belmont Park, but overcame a fair bit of ground loss to remain unbeaten in two turf starts while giving her all-conquering sire his second new graded winner on the afternoon.

Away alertly, the $140,000 Keeneland September yearling raced five or six off the inside as longshot Lexinator (Fed Biz) set the early pace from ‘TDN Rising Star’ Star Devine (Ire) (Fastnet Rock {Aus}). Eric Cancel allowed Bye Bye to improve while deep around the sweeping turn, forcing the hand of Jose Lezcano, who allowed Star Devine to stride into the lead perhaps a bit sooner than he may have liked fully three furlongs from the wire. Bye Bye confronted Star Devine in upper stretch, and although the latter boxed on gamely, Bye Bye had her number and scraped home best of all. Invincible Gal (GB) (Invincible Spirit {Ire}) ran on for second ahead of Candace O (Declaration of War) in third.

“I was concerned [about the outside],” said winning trainer Christophe Clement. “I’m a firm believer in saving ground, but there’s only so much we can do. She was wide all the way, but she was good enough to overcome it. Eric [Cancel] did the best he could.

As for what the future may hold, the Frenchman added: “We might try to make her a miler but not too much further than that. I’ll need to think about it a little bit. Let’s enjoy the moment and go on from there.”

Bye Bye debut in a six-furlong maiden over the Gulfstream main track Feb. 7, weakening to finish sixth after showing some early pace. The word was out when switching to a five-furlong turf test in Hallandale Mar. 21, as the bay validated 19-10 favoritism with a widening 2 3/4-length graduation.

Bye Bye is the 42nd winner at graded level for Into Mischief and brings the 16-year-old stallion to within three black-type winners of 100. Mighty Mischief took out the GIII Chick Lang S. at Pimlico earlier Saturday. She is simultaneously the 123rd SW and 49th group/graded winner out of a daughter of the late Smart Strike.

The May 14 foal is out of a daughter of Kinsman Farm SW Crystal Current, the dam of $875,000 Fasig-Tipton Saratoga yearling and SP Savoy Stomp (Medaglia d’Oro) and SP Mi Vida (Distorted Humor), the dam of Gold Standard (Medaglia d’Oro), who cost $1.2 million at FTFFEB in 2018 and earned a pair of graded stakes placings.

Garnet, who was acquired by Spendthrift Farm for $550,000 in foal to Uncle Mo at Keeneland November in 2016, was not covered in 2018 and produced a filly by Bolt d’Oro last year before being bred to Into Mischief‘s son Goldencents for this season.